Friday morning, 29th September, Contracting PLUS hosted the first NRF Breakfast Briefing after the Summer break and who better to address the pre-caffeined recruiters than Johnny Campbell, CEO of Social Talent.

Johnny focused on the rise of the “SuperRecruiter”; what sets apart some the best recruiters from the average?

Having started off in a video rental store, Johnny witnessed first-hand how streaming giants Netflix came in and started delivering DVDs to households across America and eventually become the powerhouse that is now with streaming television series and movies worldwide.

Johnny remarked that the recruitment industry needs to adapt and change to not be left behind in a world of automation. Efficiency was the word of the morning as Johnny outlined in a survey of 2000 recruiters there were stark differences in how the best operated. 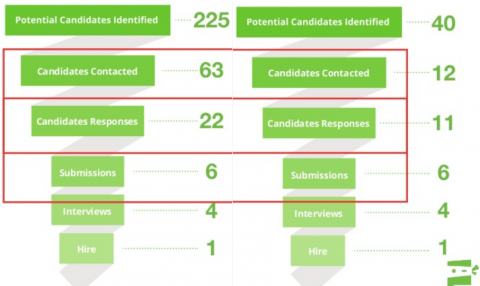 Social Talent’s survey determined that using modern means and streamlined screening process, a “SuperRecruiter” can place a candidate starting with just 18% of the original funnel. It comes down to more efficient means. Their survey found that in addition to the ever dominant LinkedIn, the SuperRecruiters would use Facebook, Instagram, and most other social media outlets to source talent. Omni-channel talent sourcing makes sure you don’t leave any stone unturned.

It was also found that phone calls to candidates were used four times as much by the most effective recruiters, supporting Johnny’s claim that personalisation is the best driver for identifying and securing the best candidates. 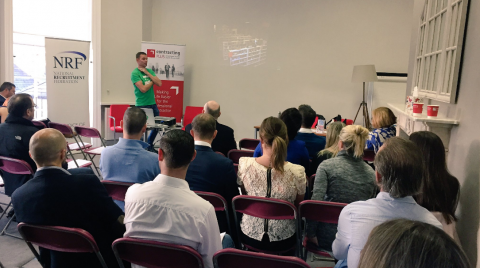 Johnny Campbell addressing the attendees in Contracting PLUS’ offices

Automation has played a huge role in modernising many industries, but has not caught on with recruitment so far. Even the implementation of chat-bots, a simple form of Artificial Intelligence, used for after-hours queries on websites showed a 100% increase in leads generated, for minimal costs. Automating even a portion of the administration work involved in the primary stages of recruitment could increase productivity and save valuable time for interviewing stages.

For Johnny’s slides simply follow this link and review for yourself.

For details on future NRF Briefings email Niamh in the NRF at admin@nrf.ie